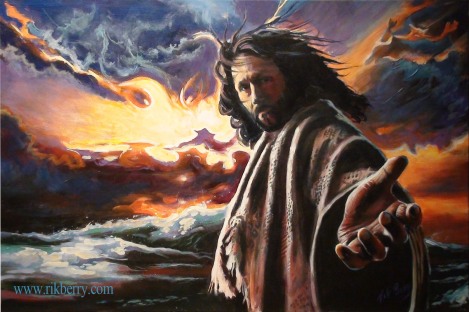 During my last year in the seminary, when I was a deacon, I was assigned to a very large parish. It was the largest parish to which I have ever been assigned. I was going every weekend to help with Mass and preach the gospel.

On one Saturday, I think it was in October, I was preparing a homily for Saturday evening. I spent whole morning trying to get my thoughts together. I read a few commentaries and homiletic suggestions for that Sunday, but it didn’t help.

I couldn’t find anything that satisfied me. About noon, I gave up and went to the chapel to say my prayers and pray about it.

At this time, during my prayers, I received from our Lord the “suggestion” that I could leave it to Him and go without a prepared homily. I pondered this option for a few minutes but it seemed, at least for me, entirely too risky. I don’t like to do things without preparation, especially homilies and especially a homily for such a big congregation.

Another argument against leaving it to God was my poor language skills. I didn’t feel my English was good enough to preach without preparation. But the Lord didn’t give up. He wanted me to leave it to Him and not worry about it, but simply go to the church, proclaim the Gospel and deliver the homily. He had promised to give me the needed words.

After a few minutes of spiritual battle I decided that I would do it His way.

After a few more minutes had passed, it came to my mind how challenging it can be and I could see how difficult it is for me to trust my Lord. I started to cry very loudly. I understood that it is like Jesus’ invitation to Peter to walk on the water. I never thought it could be so difficult to do. The most difficult part is to take the first step. Something had happened inside of me. Something had changed. I agreed at that point to walk on water in my life. I agreed to leave my comfort zone and go to the church without a prepared homily. From a simply human point of view it was immature and disrespectful behavior.

It took me a few more minutes to really understand what had happened. Then, peace came to my heart. I was thankful that God invites me and that He chooses to use me in such a way. I didn’t worry about that homily any more. After a few hours I drove to the church. I didn’t worry at all. I was sure that God would give me His words. I had in my mind one phrase with which I was supposed to begin preaching, that was all. It was meant to be enough. After the Gospel, I began the homily with that phrase. The next words were coming, and they came, word after word, sentence after sentence.

After Mass a parishioner told me that it sounded like I knew Jesus.

It still happens, from time to time, that I’m unable to prepare a homily and I hear the invitation to trust and not to worry. It goes much easier now. It’s easier to walk on water again when you’ve done it few times already. It’s also easier to do it again when you know that it really doesn’t hurt.

I was preparing today’s homily [Sunday, February 10, 2013?] for the last few days also, and once again I could not get an idea of what to talk about. I prayed about it. I was sure that God would not leave me alone and would not abandon the people to whom I was sent to preach. I decided to approach it for the last time today. Now, I only had few hours before Mass.

God surprised me again. The thought for the homily came when I was taking a shower. In just a few minutes I knew what I would be talking about. It was one of those homilies when people were totally surprised by what they heard and what they saw.